Southport Boats is the culmination of a dream that began in North Carolina when a team of experienced boat builders, passionate fishermen and offshore racing enthusiasts joined forces to develop a unique and revolutionary new boat design.

The Southport Hull was designed the maximize the performance and power of modern outboard motors, while using the most cutting edge composite construction methods.

2003  – The first Southport was launched in Leland, North Carolina. The first sea trial proved the team’s pursuit of excellence had been achieved with no other hull design of similar size delivering Southport’s soft ride, stability and nimble performance.

2011 – Manufacturing operations were moved to Maine where an expert crew of modern composite boat builders applied their heritage of craftmanship to the construction of Southport Boats.  Improvements included the transition to modern, vacuum infusion construction processes, upgraded wiring and plumbing systems, and the introduction of vinylester resin to improve cosmetic properties and guard against water permeation.

2014 – Southport Boats and C. Raymond Hunt Associates announced the development of a new 33’ hull design to deliver all the celebrated ride, performance and fuel efficiency of Southport in a larger, even more robust platform. The first of these game-changing Southport 33’s was launched in Spring 2014 to overwhelming market acceptance and acclaim.

2015 – More Southport innovation redraws the deck plan for the Southport 29 to improve usage of the spacious deck through modification of the forward cockpit, changing the positioning of the leaning post, updating the console and helm pod, and adding a new, larger T-Top style. All of these changes, plus several less obvious alterations combined to change the look and feel of the boat and produced the Southport 292, a Second Generation Southport 29.

Simultaneously, the Southport 27 took an evolutionary leap forward with the introduction of the 272 TE and 272 FE. This Southport marked the first time a Tournament Edition layout was available on an original Southport hull. The 272 features a forward coffin box, redesigned console and helm pod, modern T-Top, new aluminum open-frame leaning post, and a livewell mounted in the aft bulkhead.

2017 – Southport announces plans for the all new Southport 33 Dual Console (DC). The DC was envisioned to check all of the boxes for the modern family angler: rugged construction and ample fishability mixed with the creature comforts for the non-offshore days. The 33 DC takes the “dual purpose” approach of the 33 FE and LX and adds even more in the way of comfort and stay-aboard accommodations.

In late 2017, Southport moved to a new and larger facility in South Gardiner, Maine – a quick 15 minutes from the previous facility in Augusta.  The new 140,000 square foot facility will drive manufacturing efficiency with multiple production lines and process improvements designed to accelerate the introduction of additional, larger Southport models in the years to come.

2018 – Southport debuts the 33 DC and the design certainly hit its mark. The boat was met with positive reviews from press and fans, and sales quickly proved this point. The 33 DC is different from other Dual Consoles because of its open feel and multiple social zones, and because it is a Southport.

2019 – In late 2019 Southport announces and debuts the new Southport 30 FE, the next revolutionary step up for the Southport 292. The new boat will offer more space, modern layouts like the 33 FE, and borrow a few of the best features of the 33 DC.

2020 and beyond – Even before the debut of the 30 FE, Southport already has two new models on the drawing board, set to debut in 2020 and 2021, as well as more evolutions of existing models. 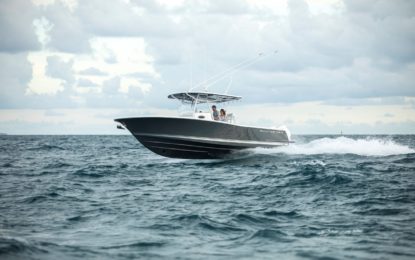 The combination of legendary hull performance, beautiful lines, and modern construction make Southport the most desirable boat in its class.

The future for Southport includes an increase in production capability, as well as our never ending search for the next ground breaking model, whether on a current Southport hull, or maybe on an all new, larger hull...

A truly excellent Southport experience can only be had onboard. Get in touch with a dealer near you to schedule a demo today, and really see what makes our boats exceptional.