A very common number thrown around when comparing boats, especially Center Consoles, is the Deadrise Angle of the hull measured at the transom. Because most planing hulls when “on plane” ride on the aft 30-50% of the hull, the deadrise angle aft is critically important for stability and soft, level ride. But what is it exactly? Put quite simply, it is the angle between a horizontal plane and the hull surface. A boat with “a lot of deadrise” is a boat with a deeper, sharper V-shaped hull. All Southport hulls carry a 22 degree deadrise angle at the transom – 46 degrees at the bow, whereas a typical flats boat, for this example, might carry just 8 degrees of deadrise, or have a completely flat bottom is some cases (like certain “skiff” boats). For that style boat, a flat, low deadrise hull is ideal and highly desired to permit these “skinny water” boats to navigate in areas where the water is less than 8-inches deep, and effectively track the fish that live in those waters. But, taking these boats offshore or into any kind of sea much over 2-feet will result in a wet ride with lots of pounding.

Southports on the other hand, while not designed to traverse flats or exceptionally shallow areas, use that Deep-V to their advantage in open water. The V shape minimizes “slamming,” softens the entry and helps the boat track as if on rails. It is how the hull surface meets and treats the water. A flat bottom boat has less ability to efficiently channel the water away as it meets the boats hull, whereas a V shaped hull can cut through the water.

Like all aspects of boat design, there is a tradeoff, and it is ultimately a matter of priorities that decide which hull design boat is right for the application. The deeper the V, the softer the reentry impact; however, the flatter the bottom the more stable. Early on the ideal established for high performance, the V shape, was popularized by C. Raymond Hunt when designing boats for offshore racing. The earliest example would be Moppie, the original carnation of the popular and iconic 31’ Bertram, which carried a deadrise of 24 + degrees. These boats wanted to “go fast” with little concern for driver comfort at anything less than full performance.

As time has progressed and the hull form has found its way into a more recreational application there has been a shift to maintain the soft ride while delivering some lateral stability and to reduce bow rise. The latter can be problematic when running in seas too “angry” to permit high speeds. It is dangerous when the operator cannot see over the bow – either when accelerating, or driving at reduced throttle in rough seas. It is for this reason the Hunt studio when designing the Southport bottom chose 22 degrees (not quite as sharp yet enough V to reduce slamming) for the aft section of the hull. As a result Southport Boats jump onto plane, and stay on plane at lower speeds – very desirable when the seas are sloppy. And with this slightly reduced angle the soft entry is preserved while delivering improved stability – both at rest when drifting over a bar or trolling for the big one. Of course the generous beam of a Southport adds to both stability and lift.

The Southport ride comes from more than just the angle of the transom: as you may have guessed, the dead rise angle varies considerably across the length of the hull, and this is called “Variable Deadrise”. Check out our next post for an in depth explanation. 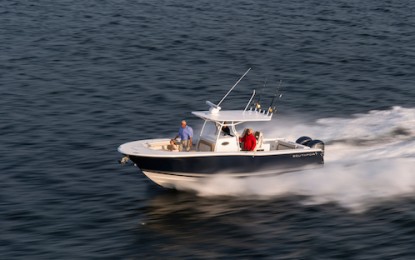 Put quite simply, Deadrise is the angle between a horizontal plane and the hull surface. A boat with "a lot of deadrise" is a boat with a deeper, sharper V-shaped hull. All Southport hulls carry a 22 degree deadrise angle at the transom – 46 degrees at the bow.