How on Earth does a Boat Show come together?

If you are on this site it is safe to assume you’ve been to a boat show or two in your life, and undoubtedly at some point probably wondered “How on earth does all of this come together?”. The answer may seem obvious, and it is: with lots of planning, and a lot of time.

The planning and paperwork for a big show like Fort Lauderdale, Miami, Palm Beach or even a large indoor show like New England or New York starts months ahead of time, when one day an envelope will show up with a contract for space at the show. The same contract is sent out to everyone, regardless of whether they are a mega yacht broker needing to display a 100′ yacht, or a ma and pop operation selling homemade sunglasses straps. Since Southport generally exhibits primarily at In-Water venues (unless it’s an indoor show), let’s focus on those. With contract in hand, we sit down with a calendar, dealer inventory list and build a schedule to determine boats that are or will be available for a show, and then complete the paperwork accordingly. Without fail, in the 6 months between the contract being submitted and the show opening, a dealer will sell the boat(s) we are counting on having available to exhibit. To say the situation is fluid is a bit of an understatement.

But we can’t plan for what we don’t know, so we press on, and usually come up with a creative solution if we end up in a bind. Months go by, and other than a few nights of waking up at 3am worrying about having missed a pre-order deadline, the show is planned and things are ordered: carpets, tents, electricity, boat cleaning services, plants, food, drinks, shipping, logistics, credentials, guest tickets, boat hauling, hotels, rental cars and airfare. Doing this without some type of checklist is like doing your own taxes without a pencil and paper.

Then when everything is in place, the move-in date arrives- generally the bigger the show, the earlier the date. For instance, this year at FLIBS the Southport move-in was a full week before the show opened, and we were not even close to the earliest boats into the show. The day of the move in is easily the most stressful. There are dozens, if not hundreds, of brand new high-value boats jockeying for position while giving the impression of simply drifting around aimlessly waiting for their call on the VHF. And don’t ever be the guy who shows up late: holding up the move-in schedule is the second most egregious boat show folly – either everyone is forced to wait, or the show goes on without you. Once your name is called on the VHF the move in is easy, especially with twin engines, bow thrusters, or a joystick piloting system as we have on most Southport models. This choreographed boat movement continues daily up to the day the show opens.

The boats are shoehorned into their spots, tied up, fenders put in place, and then the booth can be set up: a good cleaning, display signage hung, podium constructed, etc. Once this task is completed the staff spends little time there until the show opens 3-7 days later.

As well-coordinated as the move in can be, the move out at the conclusion is just the opposite. The show organizers are generally in such a hurry to get the docks removed and the marina back in working order that there is little time to neatly pack show materials once the booth is dismantled. At Southport, because our booth is small and relatively simple, most of our stuff gets jammed into lockers on the boats before they leave the dock and we unpack and reorganize it later.

On the last day of the show all exhibitors are given a move-out schedule which, while well intentioned, is behind schedule within half an hour of the move out starting, as delays quickly compound and a 9am move out can get pushed to noon. While being late to move in is the second worst thing you can do at a boat show, being late for the move out is an order of magnitude worse. A captain walking down the dock 10 minutes, let alone an hour, after his scheduled move-out time will draw the ire of every skipper he passes, as they are the ones who were sitting waiting to leave while he finished his breakfast or overslept from a late night out.

But it is all fun and we look forward to every show, and to meeting you all once again 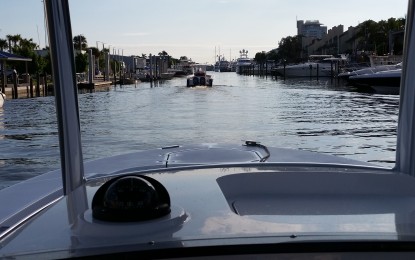 The long slow crawl to the Fort Lauderdale Boat show

Trying to plan a boat show without some type of checklist is like doing your own taxes without a pencil and paper.